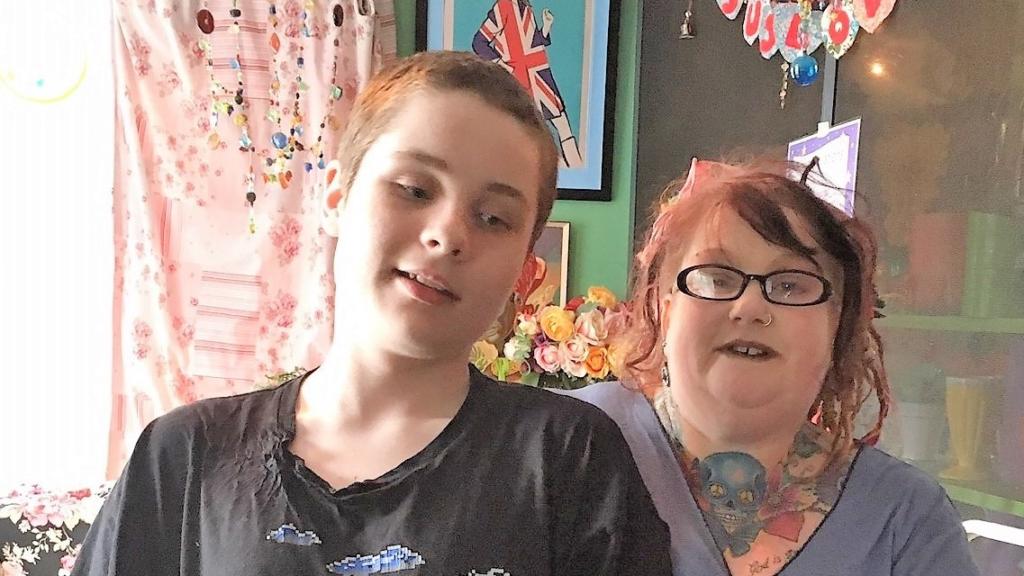 Dylan was born with Autism and Tourette’s Syndrome. Over time he also developed many food allergies. Now 14 years old it is remarkable, he is not on any medication for these issues. Tinna, his mum, grows all her own vegies and through careful management has so far been able to work with Dylan’s various health issues without medication.

Tinna, who is a fulltime Mum on a limited income has provided Dylan with a child centred home and fantasy garden which gives him restful sensory stimulation which for the most part keeps him calm and happy. Dylan who is Lego mad had a wish recently to explore space so for an early Christmas present Tinna, a self-taught artist, painted his bedroom ceiling as a picture of the universe – colourful planets and stars. Dylan was ecstatic.

Tinna has found the best way to deal with the people’s perceptions of Dylan’s “actions” as misbehaviour is to use humour. She politely explains “oh that is just autism you are experiencing” and doesn’t take offence at people’s rude comments. She’s even been known to give spontaneous mini tutorials in the supermarket on what Autism is and how to recognise it.

But one thing about Dylan’s autism really did cause Tinna a lot of anxiety and that is his propensity to run away whenever the desire took him. Tinna was constantly monitoring his whereabouts and when he did go missing her heart would sink, knowing there were busy roads close by and that Dylan had absolutely no road safety sense. She was never comfortable taking him to busy malls or to events with lots of people because the risk of him slipping away and getting lost was too high. For weeks after a “missing” event she would remain hyper-vigilant in case she lost him again.

However, all that changed when Tinna read an article about a child in a similar situation who had been found quickly due to his wearing a Wandatrak device. Tinna contacted WanderSearch Canterbury and was gifted a wrist device for Dylan. Ever since she has felt she has so much more “emotional freedom” as she can now take Dylan places and relax an enjoy life a little knowing that if he did wander, he could be found within a relatively short space of time. Wandatrak devices usually result in a search time of one to two hours as opposed to six or more hours of intensive searching without a tracking device. Tinna thinks of Dylan’s Wandatraker as his own personal security guard.

Tinna, who also has a 26-year-old autistic son likes to share her knowledge about how to cope with Autism with others whose child may have been recently diagnosed. To get in touch please contact info@wandersearch.nz

WanderSearch Canterbury is a charitable trust which seeks donations and sponsorship to provide a bank of tracking devices for people suffering from cognitive impairment and who have a tendency to wander.