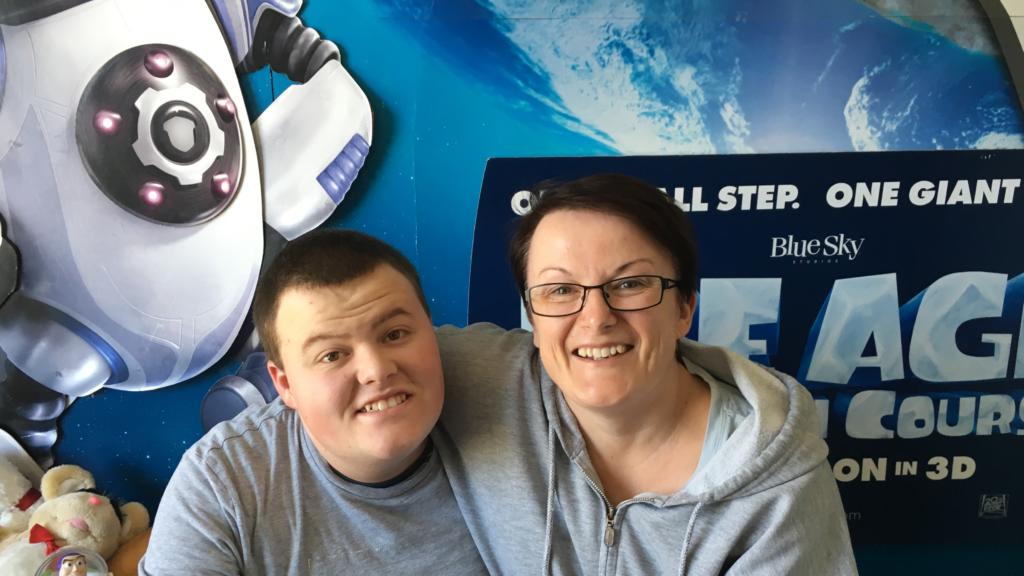 Matthew Morris is 17 years old. He lives at home with his mum, dad and older brother Michael who is 19.

Matthew is “a big boy” according to his Mum Jacki. He attends Ferndale school which he loves. He looks forward to travelling there each morning as soon as his taxi pulls up into the drive.

Movies DVD’s are Matthew’s absolute passion in life. He loves all sorts of movies from classics to modern children’s favourites like Toy Story.

Unfortunately, Matthew suffers from multiple health conditions including brain damage, cerebral palsy, heart conditions, autism and Pica – a disorder involving the eating of inedible objects. He is nonverbal and has a mental age of around three years old.

Despite his many health setbacks Matthew is a prolific runner. He is very quick and will run very far.

When he used to take off Matthew’s destination was always the local DVD shop to find more of his beloved DVD’s. At a previous home there had been a DVD shop located nearby.  One day Matthew took off to go to the DVD shop. He went without warning and moving very fast crossed several very busy roads without a second’s hesitation.

Jacki looks back on that first run not only in horror, but recalls being so disappointed that no one that day stopped him at all, despite the busyness of the streets.  “He was a young child on the street and may have even hopped into someone’s car. You can’t put your faith into people helping anymore, it’s not like the old days when the community looked out for one another.”

Luckily for Jacki and other families similarly affected by cognitive impairment she now puts her faith into Matthew’s WanderSearch Canterbury tracking device to keep him safe.

After the video store incident Jacki did some research and found a suitable tracking device available through Christchurch Search & Rescue which has subsequently developed into a charitable trust called WanderSearch Canterbury. At first Matthew hid his tracker and didn’t want to wear it but now it is part of his getting dressed routine. Jacki says, “He’s fine about it now and knows it as his watch.”

When asked what the benefit to the family is of having the tracking device, Jacki responds the benefit has been immense for the family.

“It has taken away the constant, sick dreadful feeling you get when you think he might be missing. Previously I lived in a state of constant adrenaline. “

Jacki favours Wandatrak radio devices over GPS as they are unaffected by weather and large buildings in a big city.

Ironically since he has had the device, Matthew has never gone missing.  He doesn’t try to escape so much these days as he is aware there are no DVD shops around him. His desire to run was linked to his passion for the DVD’s he loves. He now gets vouchers and they go to the mall to spend these.

It’s continually reassuring to Jacki that on such visits, Matthew has his device quietly strapped on his wrist silently tracking him.